Turkey’s breaks with the past 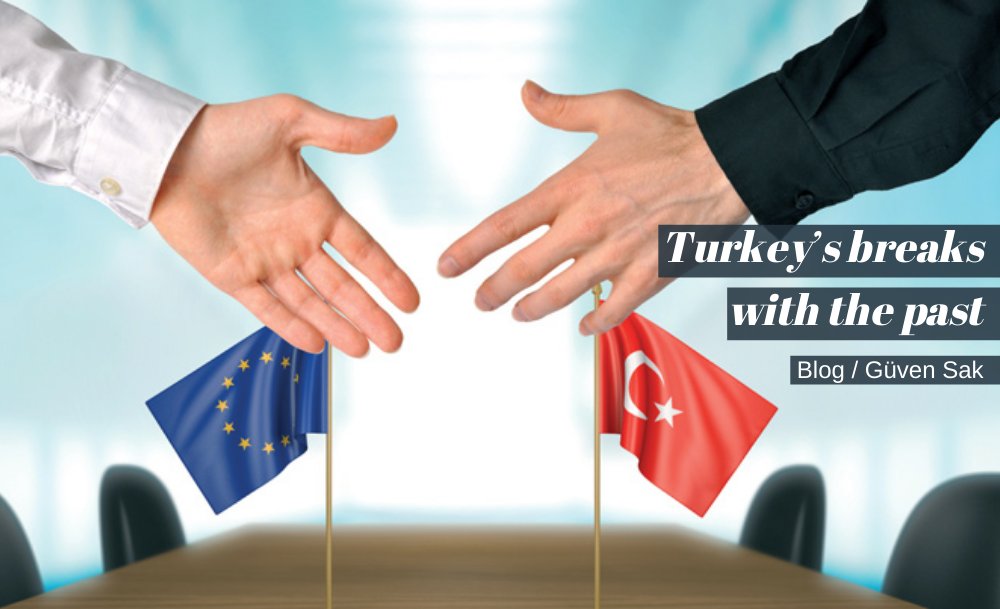 Dec. 17 was the 10th anniversary of the Arab Spring. When young Egyptians flooded Tahrir Square all those years ago, I was fascinated. I thought change was in the air, that our region could change for the better in a very short amount of time.

An experienced Turkish diplomat warned me very early on against this idea. “Do not get carried away” he told me, “Things always start with high hopes and good intentions in the Middle East, but in my experience, they get derailed sooner or later. People cannot break with their past so easily.”

I was wrong. He was right. Breaking with the past is extremely difficult and can only happen after long preparation. As Louis Pasteur said, “Chance favors the prepared mind and opportunity favors the bold.”

Turkey has broken with its past not once in recent history, but many times. The first was in the early 1920s. Our founding fathers, being seasoned officers of an imperial bureaucracy, made a clear break with the imperial past. The same aspirations to modernize were there in the major centers of the empire: Istanbul, Beirut, Damascus and Cairo. Yet the clear break only happened on the Bosphorus.

After the Second World War, Turkey broke with its past and did what was necessary to be a founding member of NATO, choosing its side in the emerging Cold War without hesitation. The single-party regime at the time held its first genuine elections, opening up an era of democratic competition. After losing his first election, İsmet İnönü, who was the second president of Turkey, stayed on as an opposition leader. It was considered degrading to do, but he found that it was necessary to guarantee a safe political transition.

In the 1980s, Turkey initiated an economic transformation by opening up to world markets. This was a painful process, involving the failure of many firms, the success of many others, massive flows of migration and relentless cultural change. In 1995, Turkey entered the Customs Union, becoming part of what has become the wealthiest economic block in human history.

It doesn’t seem so long ago, but economically, the world was a different place at the time. Amazon was just a year-old startup. Google would be established in three years, and Facebook a decade in the future.

We are now about to enter the 25th year of the Customs Union process. Is it outmoded and archaic? Yes. A failure?

No. It was a great success.

Despite the political headwinds, misunderstandings and provocations, Turkey broke with its past and transformed itself into an industrial country, and it did this by connecting with Europe. The Turkey-EU bilateral trade is now more than 140 billion euros. When looking at annual foreign direct investment (FDI) in Turkey, the EU is easily the number one “country of origin” with around 70 percent. Needless to say, this is not charity. Our relationship is mutually beneficial. Turkey is a dynamic place to do business.

In the meantime, Turkey is putting up fairly well with the annoying design of the current customs union process and transport quota restrictions. In much of these dealings, it is being treated as if it is a third country. Take Brexit as just one example of a complication. Brexit is about to happen, and Turkey and Britain want to make a deal. Yet we can’t, because according to the Customs Union framework, we have to wait for the EU’s decision first. Is this absurd and annoying? Yes. Does it doom us to failure? No. These are details we have to work on together.

The Turkish experiment is still unfolding. Turkey is not an artificial construct, no “bridge between East and West.” This is a country in flux, a country that is constantly changing with internal and now external migration, constantly breaking with its past. Turkey belongs to Europe, still converging economically, socially and politically. It is a policy experiment with many mishaps, but relentless drive. That’s where the beauty of the “Turkish model” lies. We must not get discouraged. We must keep an eye on the long-term trends and push on.

This commentary was published in Hürriyet Daily News on 19.12.2020